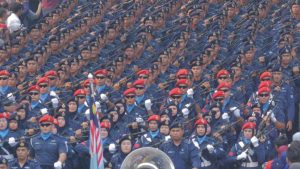 Malaysia Independence Day 2019: Hari Merdeka (Malaysian for 'Independence Day') refers to the day when the Federation of Malaya's independence from the British Empire was officially declared. At exactly 09:30 on 31 August 1957, the declaration was read by the first Chief Minister of Malaya, Tunku Abdul Rahman at the Merdeka Stadium in the presence of thousands of people … END_OF_DOCUMENT_TOKEN_TO_BE_REPLACED